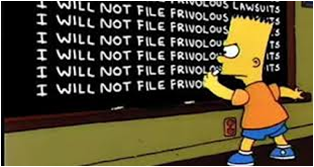 Attorneys in Texas have a new weapon in the ever-constant battle against “frivolous” lawsuits. The only question that remains is whether that weapon will ever see the battlefield, or, like the often-touted (but almost never used) “loser-pays” offer of settlement, will the rule remain locked within the pages of the Texas statutes—never to see the light of a Texas courtroom?

The new dismissal rule, Texas Rule of Civil Procedure 91a, began as a bright idea within the hallowed halls of the Texas legislature. “The Legislature . . . directed that a more determined effort be made to reduce the expense and delay of litigation, while maintaining fairness to litigants.”

While certainly anyone who has had the misfortune of dealing with a vexatious litigant can sympathize with the desire to fast-track dismissals of frivolous lawsuits, as Milton Friedman once observed, “The government solution to a problem is usually as bad as the problem.”

In response to the perceived wide-spread problem, the legislature passed HB 274. HB 274 added Government Code § 22.004(g), which calls for rules “for the dismissal of causes of action that have no basis in law or fact on motion and without evidence . . . [to be] granted or denied within 45 days of the filing of the motion to dismiss.”

The Texas Supreme Court, in complying with the mandate of § 22.004(g), promulgated the new Texas Rule of Civil Procedure 91a, entitled “Dismissal of Baseless Causes of Action.”

Anyone who has stepped foot in a federal court or a law school civil procedure course should have at least some familiarity with the language of the new Rule 91a, as the language tracks Federal Rule of Civil Procedure 12(b)(6) (as interpreted post-Twombly):

TRCP 91a – “[N]o reasonable person could believe the facts pleaded.”

While the prospect of a state court 12(b)(6) sounds encouraging at first, the problems with the new rule become apparent as you continue reading. According to the rule, “the court must award the prevailing party on the motion all costs and reasonable and necessary attorney fees incurred with respect to the challenged cause of action in the trial court. The court must consider evidence regarding costs and fees in determining the award.”

That’s right, you read that correctly: mandatory attorney’s fees. If the bells and whistles in your risk-adverse mind are not going off, you just might be one of the few who has invoked the “loser-pays” offer of settlement under HB4.

It remains to be seen if attorneys will use the new dismissal rule to pare-down or eliminate groundless lawsuits, or equally important, whether judges will grant these new motions to dismiss in appropriate cases. Until some data is available, I suspect the “bite” of mandatory attorney’s fees will serve as a sufficient deterrent to widespread use.

Error: Twitter did not respond. Please wait a few minutes and refresh this page.